Dawn greeted us over Greenland the morning of August 6th. We landed on her smaller, warmer neighbor in Keflavík, Iceland. International tourists milled about in plush coats and new daypacks, but beyond the airport, our trip diverged from the norm. A local researcher outfitted us with 4X4 trucks, we stocked up at an Icelandic Bónus (“Are we sure this means peanut butter?”), and then we were bound for Úthlíd Cottages. 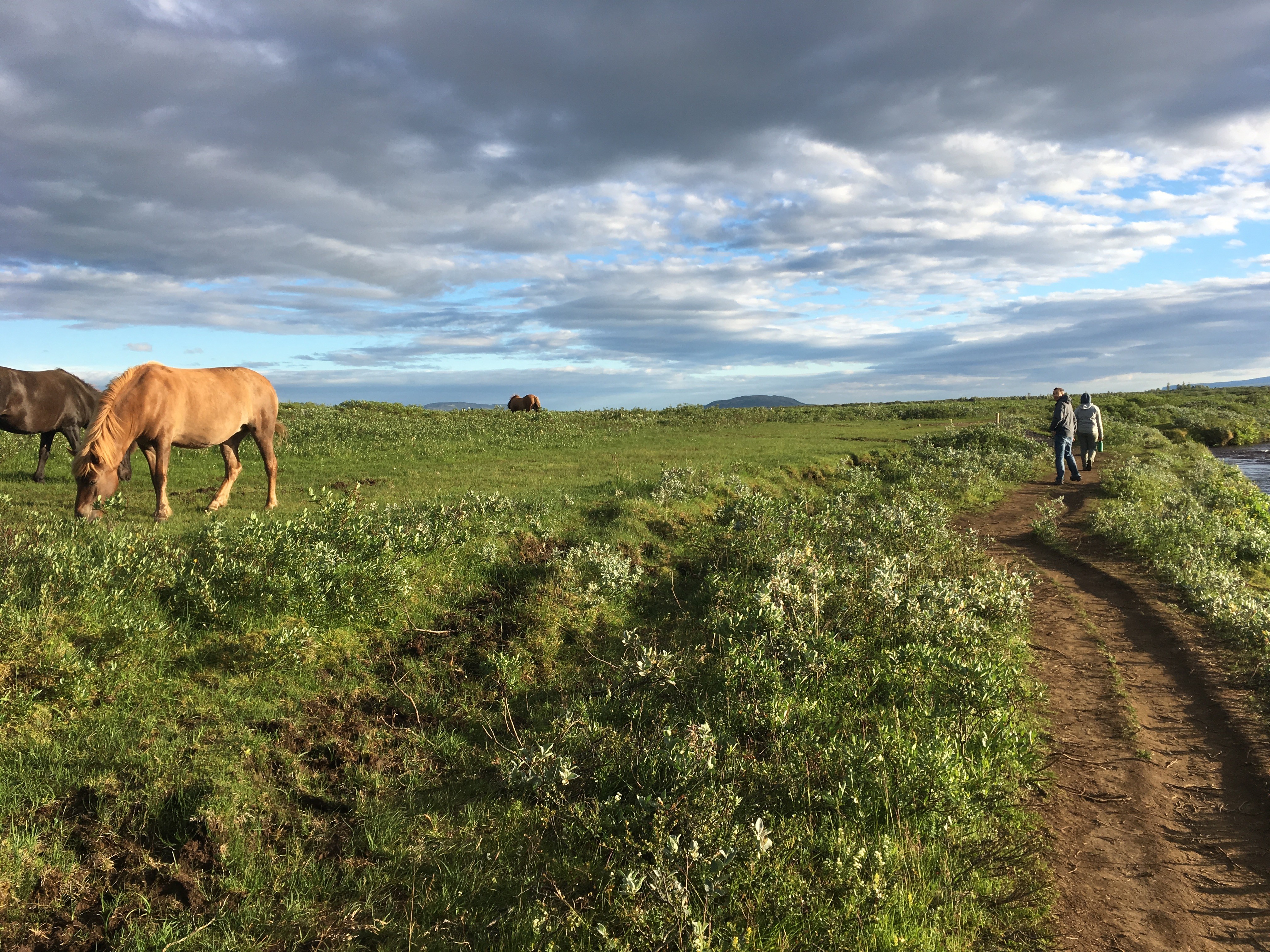 The ocean disappeared behind rolling green hills, and sturdy Icelandic ponies replaced seagulls. We crossed the mid-Atlantic ridge in Thingvellir National Park and spent the evening sampling the stream and tributary pools beneath Bruarfoss Waterfall. Field observation inevitably raises more questions than it answers. Why do the biofilms prefer standing pools to the swift stream? Why do the red and green biofilms grow in separate pools, and what processes produce their color? Do they differ in metabolism, or perhaps in symbionts? The horses pricked their ears at our excited chatter. We used these curious samples to rehearse our field protocols on the cottage’s back porch.

Our mobile field lab could be reborn daily from two suitcases. We concentrated our sample and extracted the community DNA by dinnertime. The sunlit evening was perfect for setting up our first MinION sequencing run, and the NanoOK analysis tool worked the night shift for us.

Monday at Úthlíd Cottages eased us into Icelandic fieldwork, but Tuesday we left behind the hay fields. We began to see why Iceland is considered a Martian analog; the landscape bears igneous rubble discarded by glacial migration. Hungry for something different, the eye settles on the arêtes, pointed as Giza, but formed by glaciers rather than human labor. Glaciers leaked hundred foot waterfalls down icy peaks, and beneath lay three black sheep, chewing steadily.

We stopped at Kerlingarfjöll to evaluate our main site. Kerlingarfjöll is a stunning study in contrast, when you can see it. Thick fog rolls off around eleven in the morning. Even hiking blind, the contrasts are palpable. We descended from a brisk ridge into a steaming valley. Green snowmelt and blue geothermal precipitate merged. When our hands grew cold, we unwisely warmed them over sulfuric fumes. The moisture turned to frost once we regained elevation. We sampled green biofilms, which were present on the glacial but not the geothermal banks of the stream. 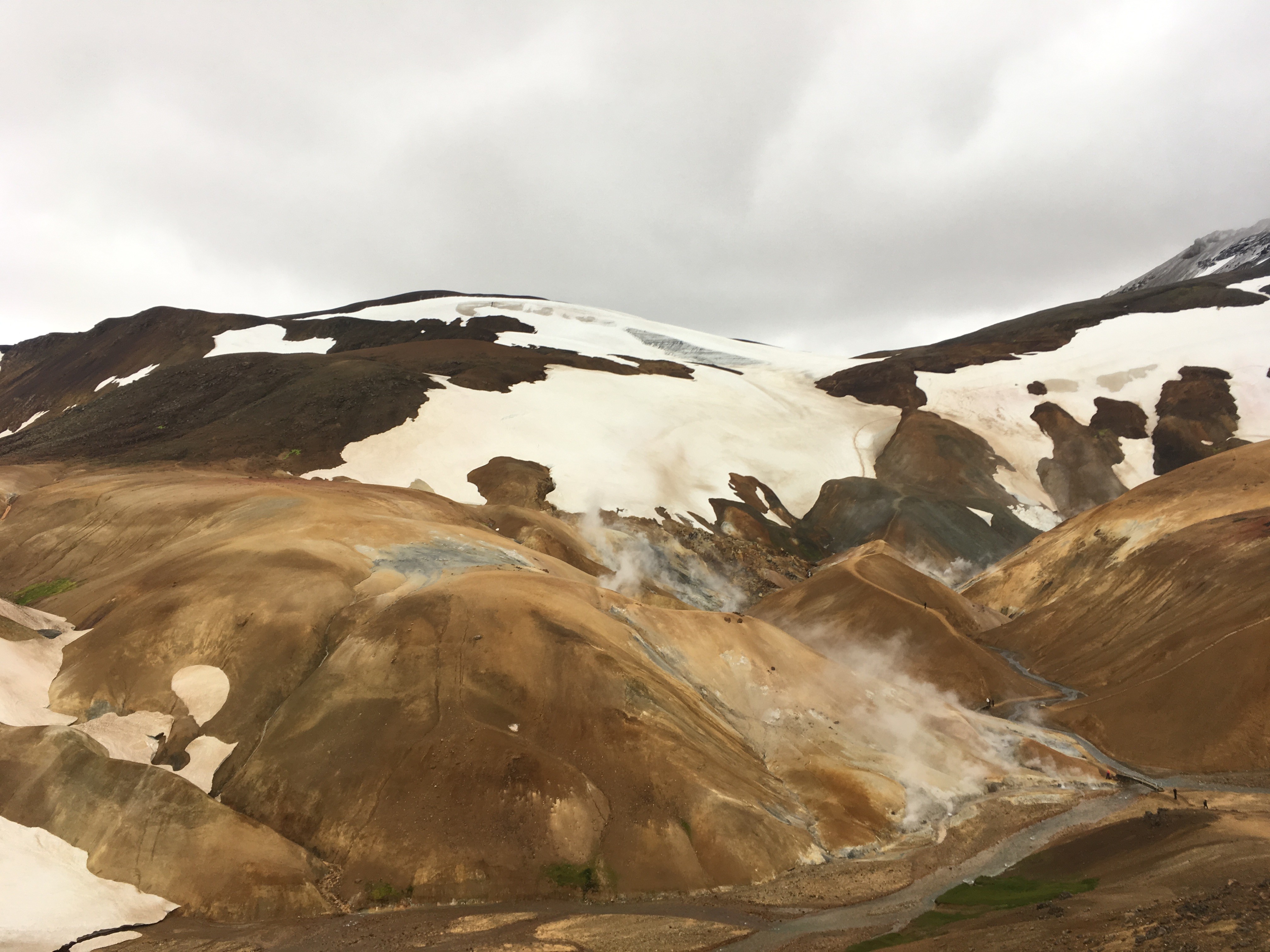 Iceland grew bleaker as we neared Hveravellir, the furthest inland we had time to venture. Mud pots and fumaroles create an oasis; unlike Kerlingarfjöll, Hveravellir has small wading birds that seem to feed on aquatic insects. They forage with their feet in boiling water and their heads in freezing wind. Hveravellir has fumaroles of all ages, from strong new plumes to old seeps. Like volcanic islands, they seem to grow out of precipitated compounds and then erode. We had observed three unique habitats in a day, and we hoped to spend the rest of the week working to comprehend a sliver of their complexity.